Today.. The Episcopal/Anglican Church prepares for the inauguration of a new Archbishop

The church is expected to receive a number of statesmen and public figures who confirmed their attendance at the bishop’s inauguration ceremony, in addition to representatives of all Christian denominations and the people of the church.

Yesterday, the Episcopal/Anglican Church had organized a ceremony honoring Archbishop Mouneer Hanna and his wife for their long service in the church, which lasted for about 21 years in the position of the Archbishop and another 21 years in Menouf Hospital affiliated with the church, where the Archbishop served as a doctor and then director of a hospital, as the Episcopal Church offered Yesterday, during the ceremony, glimpses of the life of Archbishop Mouneer Hanna, his service in the church, and his social, cultural and religious role through the various activities provided by the Episcopal/Anglican Church throughout his presidency. 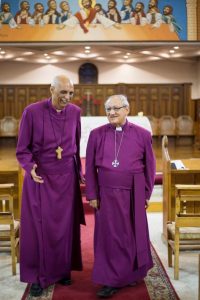