The University of Toronto, Canada awards an honorary doctorate to the Archbishop of the Episcopal/Anglican Church

The Wycliffe College of Theological Studies at the University of Toronto, Canada, announced the awarding of an honorary doctorate in theology to Dr. Mouneer Hanna Anis, Archbishop of the Episcopal/Anglican Church in Egypt, in a special ceremony through  “Zoom” virtual communication program, due to the current restrictions imposed by the Corona pandemic, on Tuesday evening.

Wycliffe College in Toronto mentioned the reasons for awarding the Archbishop an honorary doctorate, saying: In appreciation of his contribution to the growth of the Church and its transformation from a diocese to the province of Alexandria, which includes 10 African countries, as well as the growth of community services in the field of development, health and education, in addition to the effective role he plays in the dialogue between the Islamic world and the Church.

It is worth noting that Wycliffe College, Toronto, was established in 1879.

Wycliffe College bears the name of John Wycliffe, one of the symbols of reform in the Episcopal/Anglican Church, who was keen to translate the Bible into English so that it would be easy for the faithful to read and pray with it. The translation process and sponsorship are many disciples all over Europe. 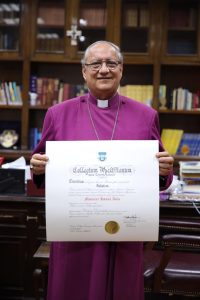 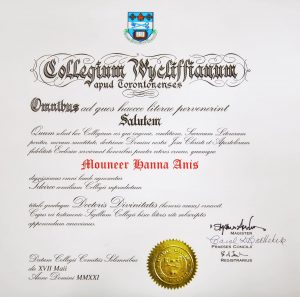