The Secretary of the Holy Synod speaking of Bishop Mouneer Hanna: He lives a pious life

Bishop Daniel, secretary of the Holy Synod of the Coptic Orthodox Church, said that Pope Tawadros sent Bishop Eclemendos as his deputy, but he insisted on attending the ceremony honoring Bishop Mouneer Hanna and that’s for the personal friendship that brings them together.

And Bishop Daniel continued: He speaks in a calm voice, his emotions are few, and he speaks constructively and does not attack others, adding: What he says on his tongue he applies in his life.

Bishop Daniel concluded: I cherish his friendship because it is beyond time, and I believe that he provided many services to the universal Church and to our country Egypt.

While Archdeacon, Emad Basilios, presented a word of thanks on behalf of the priests of the Episcopal Church, Dr. Maged Moussa, Director of the Episcopal Care Foundation, handed a bouquet of flowers to the bishop and his wife for their long service.

All Saints Cathedral had started its celebrations honoring Archbishop Mouneer Hanna, where the cathedral lit its lights that are lit in the major celebrations, and over the past two days, it received quite a few archbishops around the world, most notably  Archbishop Josia Feron, Secretary-General of the Anglican Communion Churches in the World, and Justin Badi, Archbishop South Sudan, President of the Global South Churches, Ezekiel Kondo, Archbishop of Sudan, and Foley Beach, Archbishop of the Episcopal/Anglican Church in North America. 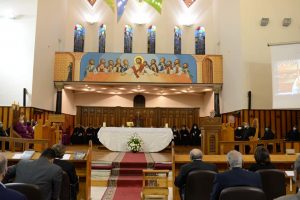 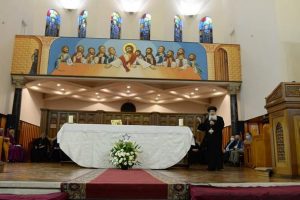 Pope Tawedrous to Bishop Mouneer Hanna: Your service is dedicated to the country and the church