The pastor of the Episcopal/Anglican Church in Giza distributes the Mawlid sweets after Friday prayers.

Reverend Michel Milad, the pastor of the Good Shepherd Episcopal/Anglican Church in Giza, distributed the Mawlid al-Nabawi sweets to worshipers leaving Friday prayers in a mosque next to his church

Pastor Michel said in a statement issued by the Episcopal/Anglican Church today: I wanted to congratulate the Muslim brothers on the anniversary of the Prophet’s birthday to emphasize the love and brotherhood relations between us.

He added: We live in love and affection together and distributing sweets is nothing but congratulations from us to our neighbors on the anniversary of the celebration of the birth of the Prophet of Islam, and the worshipers received sweets with welcome and great joy. 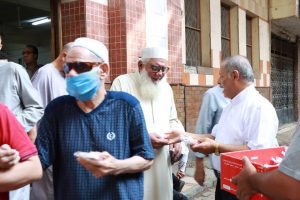 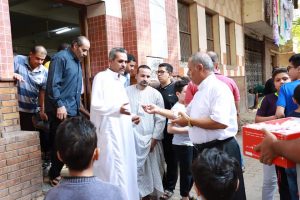 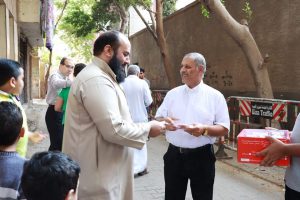 The Episcopal/Anglican church begins a project together we develop Egypt with the community of Manshia and Stanley in Alexandria.

Today, the Episcopal/Anglican church continues “Together we Develop Egypt” at the Agamy Youth Center in Alexandria.