The head of the Episcopal/Anglican church presides over a service in English at the service of foreigners.

Mouneer Hanna: Know God closely and pray to Him with supplication

Dr. Mouneer Hanna Anis, Archbishop of the Province of Alexandria  of the Episcopal/ Anglican Church, presided today, Sunday, the Sunday service in English in the Cathedral of All Saints in Zamalek, as part of the English service provided by the Church

In the sermon, Hanna narrated the story of the exodus of the people of Israel from the land of Egypt when God was walking before them in the form of a pillar of clouds in the day and a pillar of fire at night, but during the ascension of Moses to the mountain they worshiped a golden calf, which caused God’s wrath on them, adding: Moses’ supplication to God So that he forgives their sin and continues with them on their journey to the land of Canaan

Hanna said: God wants you to know him, not to know about him, citing the verse: “I want to know you and know your way, show me your glory.” Certainly, we see the glory of God in many things in nature, in love, and in forgiveness.

The Archbishop emphasized: Knowledge in the Old Testament is an intimate relationship between two parties, as it is not just superficial knowledge.

While the church was keen to ensure that precautionary measures were followed and the use of personal tools, in addition to dividing the church seats in a manner that ensures social distancing. 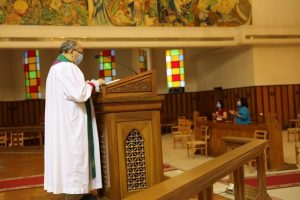