Dr. Mouneer Hanna Anis, Archbishop of the Province of Alexandria, honored the Episcopal/Anglican Church yesterday, Wednesday, the participants in the training course organized by the Media Center for the diocese and the Heliopolis Episcopal/Anglican Church after the participants received training in photography skills, writing text, directing and editing, as twelve trainees participated in it over a period of four days at the church headquarters Zamalek.

On his behalf, Dr. Mouneer Hanna, Archbishop of the Episcopal/Anglican Church, expressed his happiness with the desire of the Church’s youth to develop their skills in the various media arts, stressing that learning is a continuous process throughout a person’s life and does not end at a certain stage.

At the end of the training course, the Archbishop gave certificates of appreciation to the participants and took memorial photos with them. 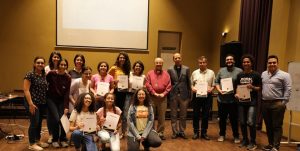 The Archbishop of Egypt congratulates the Egyptians on the anniversary of October: The spirit of victory leads us in the battle of development

The Archbishop reveals the details of the preparations for the inauguration ceremony of a new 10-nation church region.