The Alexandria Province of the Anglican Episcopal Church in Egypt, North Africa, the Horn of Africa, and Gambella organizes a special service of thanks and honor to Dr. Mouneer Hanna Anis, Archbishop of the Province, in appreciation of his 42-year service in the church, on Monday, the seventh of June, followed by Tuesday, the eighth of the same month, where the church organizes an installation service of Archbishop Dr. Sami Fawzy as Archbishop of Alexandria province and Bishop of the Diocese of Egypt.

Archbishop Dr. Mouneer Hanna Anis spent 42 years in the service of the Episcopal Church, including 21 years as director of the Harpur Memorial Hospital in Menouf, Menoufya, since 1980, after graduating from the Kasr Al-Ainy Faculty of Medicine in 1974, then obtaining a postgraduate diploma in Tropical Medicine. Internal Diseases and Gastrointestinal Endoscopy at the Royal College of Graduate Studies in London, then he studied theology from Moore University in Sydney, Australia before being ordained as Bishop of the diocese of Egypt, North Africa, and the Horn of Africa in 2000. He was appointed as Archbishop of the Province of Alexandria in 2020 and received his Ph.D. Honorary Honor in Theology from the Wyndham University of Toronto in 2020.

As for the new Archbishop, Dr. Sami Fawzy, from the College of Engineering in 1985, then he obtained a diploma in theological sciences from the University of Wales in 1991, and he has ordained a priest in 1991, and he obtained a master’s degree in 1998 and a doctorate in theology in 2000 from the University of Birmingham in the United Kingdom and served as Director Episcopal Theological School from 2012 to date. He has also been ordained as Bishop of North Africa since 2017 and was chosen as Vice Archbishop in 2020.

According to the constitution of the Episcopal Church, an archbishop retires upon reaching retirement age and appointing another Bishop elected by the church. 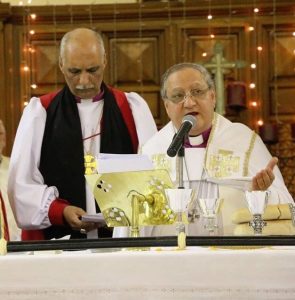 In cooperation with the health department, the Episcopal Church in Giza organizes a campaign to receive the Corona vaccine.