Refugee Egypt at the Episco Care Foundation of the Episcopal/ Anglican Church in Egypt announced details of the aid it provided to African refugees throughout July and August.
A statement issued by the Episcopal/Anglican Church said today: Refugees Egypt managed to distribute food aids to 170 beneficiaries between individual cases, sick cases, and exceptional cases, taking into account the rules of social exclusion and preventive measures.
The statement was completed: The Refugee Unit is still registering new arrivals for inclusion in the aid program.
Refugee Egypt provides services to migrants, refugees, and asylum-seekers living in Egypt who have fled their countries of origin because of war or disasters, and refugee Egypt is also seeking humanitarian assistance., and psychological encouragement and assistance in building self-sufficiency and self-respect in Framework for their preparation for repatriation, resettlement or reintegration In Egyptian society, unity is followed by the Episco Care for Services is the Samaritan arm of the Episcopal/ Anglican Church in Egypt, which In turn, it operates the centers and institutions of development and social services of the Episcopal/Anglican Church In Egypt, it’s also officially registered with the Ministry of Social Solidarity since 2003. 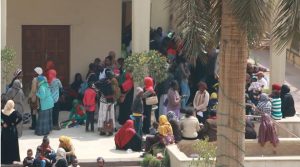