Today, Friday, the Episcopal/ Anglican Church inaugurated the activities of the Project in El Ras al-Soda region in Alexandria Governorate, as part of the project that returned to its activities last month after it was stopped due to the Corona pandemic.

Sami Fawzi, Bishop in the Episcopal/Anglican Church, said that the Church seeks to spread love and acceptance of the other among Muslims and Copts through its various projects, most notably the Together we develop Egypt Program, which the Church implements in coordination with the Misr El-Kheir Foundation.

During the inauguration ceremony of the project, the bishop added: Love is always present despite the difference in thought and belief, which is what we see clear during the various workshops organized by the project, as it is an opportunity to exchange experiences between the recipient youth and the teacher.

Fawzi cited Jesus’s saying, “Love your neighbor with all your heart as you love yourself, thanking Dr. Mouneer Hanna, Archbishop of the Province of Alexandria, to the Episcopal/Anglican Church for his constant support for the project.

Meanwhile, Sheikh Dr. Muhammad al-Khatib, professor of philosophy, belief, and Islamic law at Al-Azhar University, expressed his happiness at the inauguration of the project that brings together Muslim and Christian youth in one place.

Sheikh Al-Khatib pointed out that God created diversity between the human race and humanity in order to enrich all mankind with it, stressing that the difference between a Muslim and a Christian is an integral difference and the goal, in the end, is one of worshiping the Creator, glory be to Him, and accepting the other.

Ramez Bekhit, the project’s supervisor, presented a documentary film and spoke about the importance of mixing youth together to besiege extremist ideology and join hands together for the development of Egypt.

Bakhit added: A project is being launched together we develop Egypt in the Ras al-Sawda region, after the success of the past years in a number of local communities, after the implementation of programs that employ the creative energies of young people and enable them to implement community projects that cultivate love and peace among the various spectrums of society.

The opening words were followed by the start of workshops for teaching washing machine maintenance for young men and the maintenance of mobile phones and learning the craft of hairdressers for young women by trainers who had previously learned these trades through the project itself.

The Cairo community initiative for the “Together We Develop Egypt” project was launched last month in partnership with the Gusuor Cultural Center of the Episcopal/ Anglican Church. And activating teamwork based on celebrating difference.

The project is being held under the auspices of the Province of Alexandria of the Episcopal/ Anglican Church in Egypt with North Africa and the Horn of Africa, and the Misr El-Kheir Foundation

The project will include a set of initiatives and events in the governorates of Cairo, Alexandria, Minya, and the cities of Sadat and Menouf in Menoufia.

The project aims to establish strong and real relationships and friendships between young people, develop their capabilities and raise their cultural and civilizational awareness, in addition to the participation of trainees together in implementing practical initiatives that benefit their local communities, with the aim of reaching a degree of integration and quality of work by communicating with government agencies and community organizations works in the same direction that their initiative is related to. 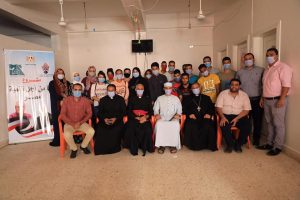 In the first Sunday Service in Arabic