The Episcopal/Anglican church begins a project together we develop Egypt with the community of Manshia and Stanley in Alexandria.

The Manshia and Stanley community initiative begins with an entertainment activity for the youth of the Together we develop Egypt Project.

Today, Thursday, the Anglican Episcopal Church inaugurated the activities of the Together we Develop Egypt project in the Manshia and Stanley regions of Alexandria Governorate, with an entertainment activity through a cruise in which 40 young people participated.

The activities of the project had started in Alexandria Governorate at the beginning of last September in Al Ras Al-Souda and Al-Agami.

On his behalf, Ramez Bekhit, the supervisor of the project, presented a background on the work during the past years in the Alexandria governorate. He also talked about the importance of integrating young people to besiege extremist thought and joining together for the development of Egypt.

The day included a number of entertainment activities such as singing and group games. Young people also talked about the importance of difference and how to create a common ground and deal as human beings without regard to religious beliefs. The youth also emphasized the importance of social media and the extent of its impact on the opinions of young people in society.

While the participants reviewed their activities that they jointly organize as Muslims and Christians through performing and singing performances, in cooperation with the Episcopal/Anglican Church of Manshia, Stanley, and the Arkan Cultural Center through the production of films about coexistence from within the initiatives of the Together we develop Egypt project.

The Manshia and Stanley Community Initiative include a series of lectures on discovering the talents and creative energies of youth.

The project is being held under the auspices of the Province of Alexandria of the Episcopal/Anglican Church in Egypt with North Africa and the Horn of Africa, and the Misr El-Kheir Foundation 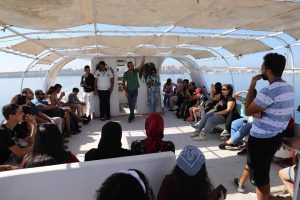 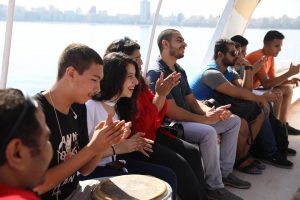 The Archbishop congratulates the Egyptians on the anniversary of the Prophet’s birthday.

The pastor of the Episcopal/Anglican Church in Giza distributes the Mawlid sweets after Friday prayers.