The bells of All Saints Cathedral in Zamalek rang out to announce the start of the service of honoring Dr. Mouneer Hanna Anis, Archbishop of Province of Alexandria, and his wife for their long service in the church, which lasted about 21 years in the position of the Archbishop and another 21 years in Menouf Hospital affiliated with the church, where the bishop served as a doctor and then director of Harpur hospital.

As the procession of Bishop Dr. Mouneer Hanna began to enter to announce the start of the prayers, he left his headquarters, led by deacons and then priests, to reach the Archbishop of the church at the end of the church procession that ends with the church structure.

Then the church choir begins to sing a hymn, “Without grace, I would not have seen you, nor would I have a place in your name.”

All Saints Cathedral has intensified its preparations to receive the event, as the cathedral lit up its lights that are lit in the major celebrations. Over the past two days, it has received quite a few Archbishops of the Church around the world, most notably Archbishop Josia Feron, Secretary-General of the Anglican Communion of the Episcopal Churches in the World, and Justin Baddy, Archbishop of South Sudan and President The Southern Churches Union, Ezekiel Kondo, Archbishop of Sudan, and Foley Beach, Archbishop of the Anglican Church of North America.

In the same context, the church receives a number of statesmen and public figures who confirmed their attendance at the service ceremony honoring the bishop, in addition to representatives of all Christian denominations and the people of the church.

While the Episcopal Church presented, during the ceremony, glimpses of the life of Archbishop Mouneer Hanna, his service in the church, and his social, cultural, and religious role through the various activities provided by the Episcopal/Anglican Church throughout his presidency. 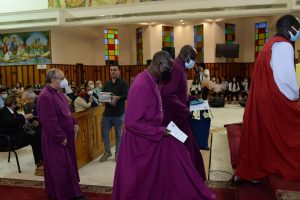 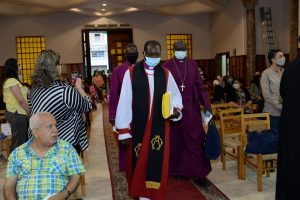 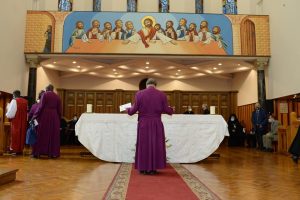 Bishop Samy Fawzy: Bishop Mouneer Hanna is a merchant who invests in the kingdom of God

Archbishop Mouneer Hanna: The hand of God led me to walk above the waves despite the troubles