Dr. Samy Fawzy, Archbishop of Episcopal/Anglican Province of Alexandria, congratulated Beit Al Aila, at the Foundation’s headquarters in Al-Azhar Al-Sharif, where he headed an ecclesiastical delegation for this purpose.

Archbishop Samy said during his visit that the Episcopal/Anglican Church aspires to complete the programs and projects of religious dialogue, such as the Together for Egypt project, which included priests and imams, as well as the together we develop Egypt project directed at youth

The bishop valued the role played by the Egyptian Beit Al Aila in creating a state of coexistence and peace between the various churches and Islamic institutions, pointing to the start of a joint dialogue between Al-Azhar and the Anglican Church in the world at the beginning of the millennium.

Meanwhile, Selim Wassef, dialogue advisor at the Episcopal/Anglican Church, stressed that the church believes in the necessity of development initiatives in the local communities in which dialogue projects are taking place, such as Together we develop Egypt, where the youth worked to establish literacy classes and campaigns for afforestation and the revival of ancient traditional crafts as well as learning in the arts.

On his behalf, Dr. Muhammad Shama, Secretary-General of the Egyptian Beit Al Aila, said that Islam guarantees equal rights for all without distinction between gender, religion or color, as well as Beit Al Aila, for it is for everyone everywhere.

Shama welcomed any initiatives presented by the church, saying: We appreciate any idea that includes meetings because it creates love and makes people feel safe with others and respect their opinions.

Shama added: She called on young people in the family home to raise awareness of the importance of the Corona vaccine, as well as to eradicate illiteracy, because illiteracy is a fertile soil for extremism, and we do not mean illiteracy in writing and reading, but rather illiteracy in thought.

Shama explained: Civilization is not based on unilateral thought, but rather is generated from different ideas through dialogue between people and listening to their ideas

As for Dr. Kamal Bariqa, Rapporteur of the Monitoring and Suggestions Committee at the Egyptian Beit Al Aila, he said we hope to re-launch a project together for Egypt, which has achieved great success, and I have talked about it in more than one international forum.

The meeting was attended by Reverend Yashua Bakhit, Dean of All Saints Cathedral, Pastor Michael Milad, patron of the Episcopal Church’s Dialogue Committee, and Selim Wassef, Counselor for Dialogue in the Church, and from the family’s home, attended by Dr. Ahmed Obaid 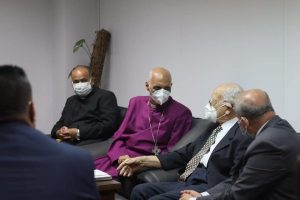 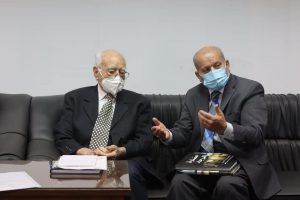 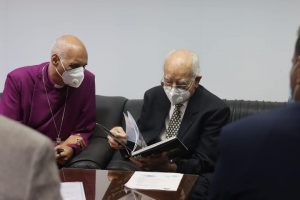 To complement the initiative together we develop Egypt