Dr. Samy Fawzy, Archbishop of the Episcopal/Anglican Province of Alexandria, congratulated Dr. Shawky Allam, Mufti of the Republic, on the occasion of renewing his position for an additional year by a republican decision.

The Archbishop considered that President Abdel Fattah El-Sisi’s renewal decision reflects the confidence of the political leadership in the Mufti of the Republic, after his efforts over the past years, in which he worked to spread the image of truly moderate Islam with great dedication.

The Archbishop indicated: I met the Mufti of the Republic for the first time before Eid al-Adha in a friendly session in which the spirit of love and brotherhood prevailed, and the tolerant and friendly personality of the Mufti, concluding: You were a symbol of love and tolerance. 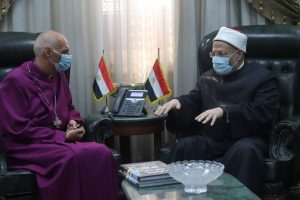 At the Conference of the Council of Anglican Provinces of Africa