The Archbishop to the Episcopal Care Institution: We have a lot ahead in development work

With all its programs and sectors, the institution awaits many fields of development and social work, which the Episcopal/Anglican Church aspires to extend.

Bishop Samy described the institution with the good arm of the Samaritan, which works to serve the poor and marginalized groups in the targeted communities for the development and improvement of people’s conditions, adding: I am proud of the work that Episcocare is doing.

The meeting was attended by Dr. Maged Mousa, Director General of the Episcopal Care Foundation, directors of work units, sectors, and development work programs in the Foundation.

It is worth mentioning that the Episcopal Care Foundation for Social Services works to deliver the message of development and social work for the Episcopal/Anglican Church in Egypt through education and awareness programs, economic empowerment, early childhood, health improvement, home environment improvement, community participation, and support for refugees and children with special needs. 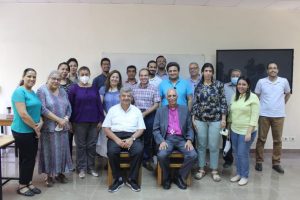 Archbishop: The Conference of the Global South will be held on Zoom instead of Egypt next October