The Archbishop: The Church raises its prayer for the negotiations of the Renaissance Dam in Kinshasa

Dr. Mouneer Hanna, Archbishop of the Province of Alexandria, announced to the Episcopal/Anglican Church that the Church raises a special prayer to God for the success of the round of negotiations that began yesterday in Kinshasa under the auspices of the African Union at the level of the ministers of Egypt, Sudan and Ethiopia to reach a solution to the Renaissance Dam crisis.

The Archbishop added in a statement today: We pray to God that the solution is acceptable to the three countries and guarantees the water needs of the peoples of the region, adding: The water of the Nile is a gift from God and should be a cause of blessing for all and not a motive for conflict.

He concluded by saying: We pray to God to grant wisdom to all officials and participants in negotiations in order to avoid conflicts and bring peace to the benefit and development of the three peoples.

It is worth noting that the province of Alexandria of the Episcopal/Anglican Church is the 41st region of this Church around the world and includes under its presidency 10 countries, namely Egypt, Libya, Tunisia, Algeria, Eritrea, Ethiopia, Djibouti, Somalia, Chad, and Mauritania. 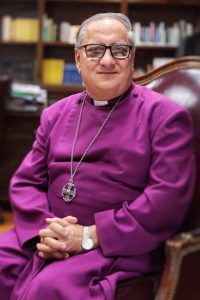