The Archbishop reveals the details of the preparations for the inauguration ceremony of a new 10-nation church region.

Feron confirmed in his call his desire to attend the inauguration ceremony of the new region in Egypt in the first quarter of 2021, expressing his hope that the new year will bring a solution to the crisis of the Covid 19 Pandemic, which contributes to the return of the tourism and travel movement to its nature in a way that facilitates the attendance of the Church archbishops from different around the world

While Dr. Mouneer Hanna, Archbishop of the Province of  Alexandria, held a meeting with the church’s administrative and executive leaders to set a preliminary plan for this huge celebration, as tasks were distributed to the attendees and an initial vision was drawn up for the celebration to be held in the first quarter of 2021

The Secretary-General of the Anglican Communion  Episcopal Churches in the World, Josia Edo Feron, announced the establishment of the new region last June, saying: “In recent years we have seen the great growth in the diocese of Egypt, North Africa and the Horn of Africa, especially in the Gambella region in Ethiopia and in the regions as well, and the Diocese of Egypt is one It is one of the largest dioceses geographically and the most diverse in the Union of Episcopal/ Anglican Churches in the world, and this region is distinguished by being one of the most developed regions in the world. Thanks to Archbishop Mouneer, the priests, and the people of the parish for this growth in spite of the great cultural and political diversity in the areas served by the diocese

Feron stressed in his statement: The transition from a diocese in the Jerusalem and Middle East region to four dioceses in the new Province of Alexandria will give a great basis for growth and stability for the Episcopal Christians in this region. I warmly congratulate the people of the new region. I look forward with passion to my time with the leaders of the Union. The Episcopal/Anglican Church in the world visiting Egypt to celebrate the inauguration of the forty-first region in the Union of Episcopal/ Anglican Churches.

Justin Webley, Archbishop of Canterbury, sent a letter to congratulate Archbishop Hanna for assuming the position of the first archbishop for the new province of Alexandria, affirming his confidence in Hanna’s ability to advance the Episcopal/Anglican Church in that region with his good relationship with the Sheikh of Al-Azhar pushing the fields of development and interfaith dialogue forward. 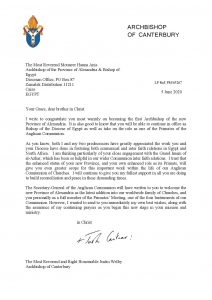