Dr. Sami Fawzy, Archbishop of the Episcopal/Anglican Province of Alexandria, received today, Sunday, Han Moritz, the Dutch ambassador in Cairo. The ambassador congratulated the Archbishop on his inauguration as Archbishop

The Archbishop said that the Church is interested in projects of religious dialogue and establishing the values ​​of coexistence among all spectrums of the Egyptian people, especially the youth. These are the efforts that the Church launched years ago through the Together for Egypt project to train elders and priests and together for the development of Egypt, which shows great interest in young Muslims and Christians.

The Archbishop invited the Dutch ambassador to attend the closing ceremony of the project on the twenty-sixth of August, pointing out that the project contributed to creating a state of coexistence and love between the participants in different societies, while the Dutch ambassador expressed his desire to attend the closing ceremony of the project whose activities extended In several governorates, namely Cairo, Giza, Alexandria, Minya, Suez and the cities of Sadat and Menouf in Menoufia Governorate, noting that the embassy is interested in learning about the results of the project.

It is worth mentioning that the Together we Develop Egypt project aims to establish strong and real relationships and friendships between young people, develop their capabilities and raise their cultural and civilizational awareness, in addition to the participation of trainees together in implementing practical initiatives that benefit their local communities, with the aim of reaching a degree of integration and quality of work. By communicating with government agencies and civil society organizations that work in the same direction to which their initiative is linked. 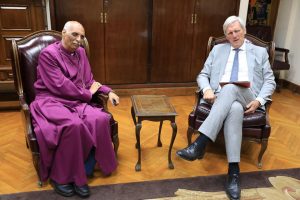 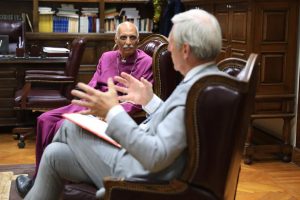 Archbishop Congratulating the Islamic New Year: We pray for the good and peace of our country

Episcopal Hospital in Sadat: The start of the first medical convoys in the area of…