Dr. Samy Fawzy, Archbishop of the Episcopal/Anglican Province of Alexandria, received a delegation from the Bible society at the headquarters of All Saints Cathedral in Zamalek.

The Archbishop praised the new publications of the Bible Society, such as an open book project in every home to educate young people to understand the Bible with their families, and the Bible project with illustrative backgrounds and written reflections that explain the social, historical, and cultural context of events to enable them to better understand the text.

The Archbishop referred to the experiences of audio and audiobooks, which have gained popularity among readers in recent times, wishing that this technology would spread among Christian publishing houses

On his behalf, Amir Elhami, the director of the bible society, invited the bishop and priests to visit the house’s headquarters and inspect the activities.

The meeting was attended by the Episcopal/Anglican Church, Reverend Emad Basilios, Head of the Council of Priests, Reverend Joshua Bekhit, Rev. Michael Milad, Amir Ilhamy, Director of the bible society, Hani Gaballah, Deputy Director of the Sales Sector and Director of Branches Department, and Marco Narrows, Director of Downtown and Shubra Branches. 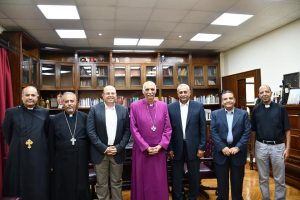 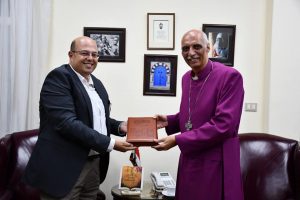 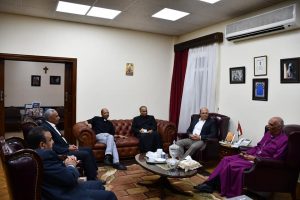 In partnership with the German Embassy