The Archbishop participated in a meeting with the Anglican Communion.

The Archbishop: Postponing the general conference meeting until next October

Dr. Mouneer Hanna, Archbishop of Province of Alexandria of the Episcopal/Anglican Church in Egypt, participated in the meeting of the Executive Committee

Emerging from the Union of Episcopal/Anglican Churches in the South of the Globe, where it discussed the role of churches in supporting and encouraging parishes in light of the Covid 19 pandemic, with the need to unite in prayer in order for God to put an end to this Pandemic.

The Episcopal/Anglican Church stated in a statement today: that the committee decided to postpone the general conference meeting from next May until October in order to have an opportunity to facilitate flying from country to country, as Cairo was chosen as the venue for the conference.

The statement added: The committee discussed the importance of strengthening the churches, especially in Africa, in the field of sustainable development and theological education.

The meeting was attended by Archbishop Dr. Mouneer Hanna, each of the Archbishops of the regions of South Sudan, Myanmar, Chile, the Indian Ocean, Singapore, Bangladesh, and the Congo. 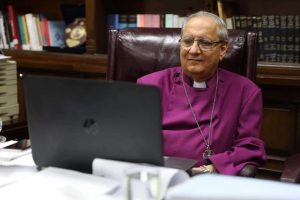 Episcopal Church: We wish a Parliament that would advance political and legislative life