The Archbishop on Martyrs Day: We pray for the martyrs of the medical teams, the army and the police.

Dr. Mouneer Hanna Anis, Archbishop of the Province of Alexandria, confirmed to the Episcopal/Anglican Church that the commemoration of the martyr’s day, which Egypt commemorates today, Tuesday, renews the meaning of redemption and sacrifice, and reminds us of the continuous process of struggle and giving that the Egyptians have written with their blood from the dawn of history until today.

The Archbishop said in a statement today: On this day we pray for all the martyrs in all fields, those who defended our lives in their war with terrorism and those who lost their lives in hospitals in another war with an unknown pandemic, they responded with all sincerity, stressing that the medical teams and workers in the health sector did not surrender for a moment, just as the martyrs of the army and the police did.

Hanna indicated that the Church glorifies and reveres the martyrs and prays for them, stressing the value of martyrdom in the Christian life and in the thought of the early Church.

The Archbishop concluded: We pray to God to reward them and pray to their families who have been patient and endured the experience of loss. 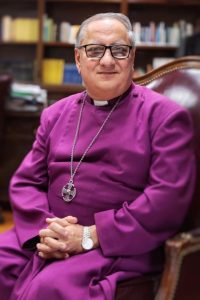 El-Manara Center: A day to train people with disabilities on candle making