Dr. Mouneer Hanna, Archbishop of the Province of Alexandria of the Episcopal/Anglican Church in Egypt and North Africa with the Horn of Africa chaired a meeting with members of the synod of the Church in the ten countries, Egypt, Algeria, Tunisia, Libya, Chad, Mauritania, Ethiopia, Djibouti, and Somalia, during a virtual session through the Zoom program, which began by emphasizing the importance of the discipleship principle and its role in the ecclesiastical service, stressing It was the message of Christ to his disciples, which they followed, and the church was established

The Episcopal/Anglican Church stated in a statement today, Thursday: During the meeting, the leaders of the various churches presented a set of reports on the service in the ten countries that follow the region between the dioceses of Egypt, North Africa, the Horn of Africa and Gambella, as the leaders of the churches presented the latest developments in the church and community service in their countries in addition to the Pastoral visits.

Last July, the Archbishop of Canterbury announced the establishment of the Province of Alexandria of the Episcopal/Anglican Church, which includes Egypt, Algeria, Tunisia, Libya, Chad, Mauritania, Ethiopia, Djibouti, and Somalia, and Bishop Mouneer Hanna was chosen as its president. 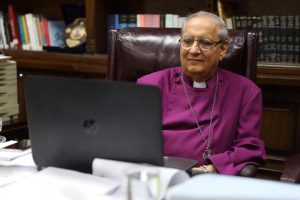 EpiscoCare: Building the capacity of volunteers in community centers