Dr. Mouneer Hanna Anis, Archbishop of the Province of Alexandria, of the Episcopal/Anglican Church with North Africa and the Horn of Africa, cast his vote today, Sunday, in the elections to the House of Representatives, the second phase of which is taking place.

The Archbishop, who is also the Bishop of Egypt, cast his vote near his church headquarters in Zamalek and said in a statement that the House of Representatives plays a prominent role in establishing the democratic life that we seek, as it is considered the first chamber of parliament alongside the Senate

Hanna called on the masses of Egyptians to vote in the elections that take place over the course of two days, praising the integrity and ease of the electoral process

Hanna stressed: It is imperative that voters choose parliament members very carefully from among those who have political or practical experience that enables them to represent and express Egyptians. 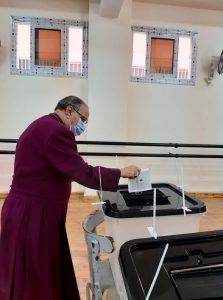