Dr. Mouneer Hanna, Archbishop of Episcopal/Anglican Province of Alexandria, made a phone call to Archbishop Hossam Naoum, Archbishop of Jerusalem and the Middle East, to check on the situation in the occupied Palestinian territories following the repeated attacks led by the Israeli occupation army on multiple areas, including the Sheikh Jarrah neighborhood in which the Episcopal Church in Jerusalem is located.

During the call, Bishop Mouneer expressed his pain over what is happening in Palestine, stressing the Egyptians’ full solidarity with the Palestinian people.

On his behalf, the Archbishop of Jerusalem said that the Palestinian people appreciate President Abdel Fattah al-Sisi’s stance towards the Palestinian cause and his support for the reconstruction of Gaza, adding: The situation here is difficult as we pray for a just peace that gives the Palestinians their right to live as an independent state.

Archbishop Naoum added: The Episcopal Church in Jerusalem has taken an initiative to collect donations for the reconstruction of Gaza and to support the Episcopal Church Hospital (Al-Ahly) in Gaza, which receives a large number of injured. 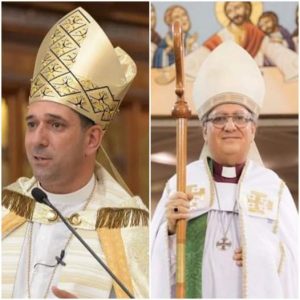 The University of Toronto, Canada awards an honorary doctorate to the Archbishop of the Episcopal/Anglican Church

At a ceremony honoring the old members…