The Archbishop meets with the Minister of Justice to discuss the draft Personal Status Law.

The Church mentioned in a statement today, the reasons for the dissolution of marriage in the legislation of the Episcopal/Anglican Church include two basic matters, the first is the death of one of the spouses, in fact, or judgment, while the second is divorce

According to the legislative principles of the Episcopal/Anglican Church, it is not permissible to divorce between Christians by the will of the spouses or by their agreement, while articles from 73 to 78 in the list indicate cases in which one of the spouses is allowed to request a divorce, which is the husband leaving Christianity to another religion or sect that is not recognized, or the adultery of one of the spouses with regard to any An act indicating marital infidelity falls under the door of adultery, such as the escape of one of the spouses with another person, or the emergence of documents, correspondence or pictures indicating the occurrence of a sinful relationship.

Article 77 states the right to request a divorce in the event that one of the spouses suffers from complete insanity or chronic disease with no hope of recovery resulting in the impossibility often between them, while Article 78 pertains to the right of one of the spouses to divorce in the event of a prison sentence for one of them in a misdemeanor or felony for a period of three years or more.

It is worth noting that the personal status list for the province of Alexandria is in effect in the countries of the Alexandria region, which are Egypt, Libya, Tunisia, Algeria, Eritrea, Ethiopia, Djibouti, Somalia, Chad, and Mauritania. 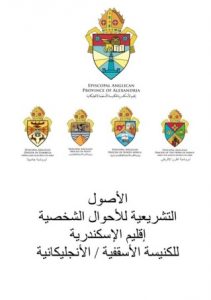 The Archbishop congratulates the Egyptians on the anniversary of the Prophet’s birthday.