The Archbishop said in a statement today: The meeting included a discussion on the developments of the Bishop Mouneer Hanna Center for Islamic-Christian Studies, which the Episcopal/Anglican Church will open early next year, stressing that Al-Azharwelcomes that step.

The Archbishop stressed that the center reflects the extent of cooperation between Al-Azhar and the Episcopal/Anglican Church in the field of interfaith dialogue, as this is done across several levels and through multiple programs, most notably “Together for Egypt”, in which elders and priests were trained under the auspices of Al-Azhar 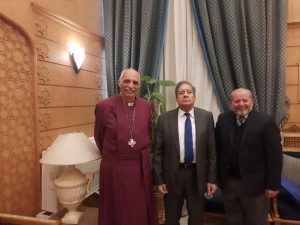