The Archbishop, in his meeting with the Irish Ambassador: We cooperate with various organizations to serve people.

Dr. Mouneer Hanna, Archbishop of the Province of Alexandria of the Episcopal/Anglican Church in Egypt with North Africa and the Horn of Africa, Ambassador Sean Origen, Ireland’s ambassador in Cairo, at the headquarters of the All Saints Episcopal Cathedral in Zamalek.

The church stated in a statement today:

The bishop and the ambassador exchanged an update on the history of the Episcopal/Anglican Church in Egypt, especially the medical service, which has long been associated with Dr. “Frank Harper” of Irish origin, who used to serve the citizens all over Egypt with a simple boat used as a mobile clinic and medical staff to treat patients until he reached the city of Menouf and at that time the people of the city asked him to continue to serve them there. From here, the medical service began to grow until the Harpur Hospital in the city of Menouf, affiliated to the church, which exists until now, has the same vision of serving and caring for people.

The Archbishop added: We seek to serve people and cooperate with various bodies, adding: To complement the Church’s vision of community service, we established Harpur Hospital in Sadat City, and we worked to prepare medical convoys in the cities of Menouf and Sadat and praised the historical relations between Ireland and Egypt.

On his behalf, the ambassador praised the service of refugees sponsored by the church for a long time, in addition to teaching and qualifying the deaf to help them out of society, and how the church took upon itself the ecclesiastical service of the deaf in masses and ordained the first deaf deacon. 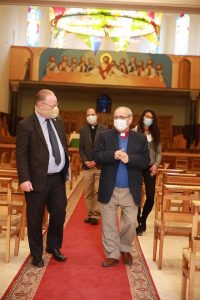 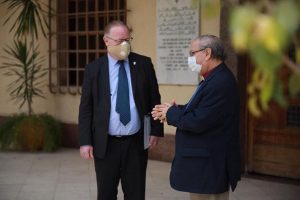