The Archbishop congratulates the Copts: Let the joy of the birth of Christ lift the clouds of anxiety and disease

Dr. Mouneer Hanna, Archbishop of Province of Alexandria, congratulated His Holiness Pope Tawadros II and the masses of Egyptian Copts on the glorious Christmas, whose prayers are presided over by the Pope this evening, Wednesday.

In a statement issued by the Episcopal/Anglican Church today, Hanna said: We wish His Holiness Pope Tawadros and the Egyptian Coptic Church a happy holiday in which the joy of the birth of Christ removes the clouds of anxiety and fear that the world experienced due to the Corona pandemic.

The Archbishop of the Episcopal/Anglican Church wished Pope Tawadros to continue his reform efforts that he leads the Egyptian Church, adding: May God lead us in the procession of victory at all times in our ecclesiastical mission and our duty towards our homeland Egypt 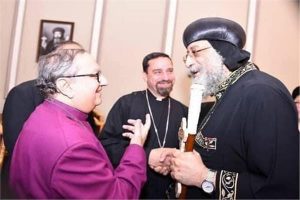 Thankful for a servants life