Dr. Samy Fawzy, Archbishop of the Episcopal/Anglican Province of Alexandria, congratulated His Holiness Pope Tawadros II, Pope of Alexandria and Patriarch of the See of St. Mark, on the ninth anniversary of his ordination as Pope of the Coptic Orthodox Church

The Archbishop described His Holiness Pope Tawadros as a man of love and reform who is keen on opening the Coptic Church to all Christian denominations and expresses this in word and deed.

The Archbishop affirmed that the years of Pope Tawadros’ witnessed many defining moments in the history of Egypt, in which the Pope was able to lead the ship with wisdom and love for all.

The Archbishop prayed to His Holiness, Pope Tawadros that God would prolong his days of service in the Church, expand his borders, and bless everything he could reach. 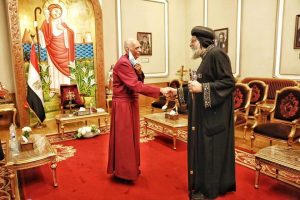 Archbishop on his reception of Prince Charles: Historic visit

The Archbishop meets with the leaders of the Alpha Egypt program