Dr. Mouneer Hanna, Archbishop of Province of Alexandria, presided over the Episcopal/Anglican Church Mass prayers at the Jesus Light of the World Church in Old Cairo.

And the Church stated in a statement today: The bishop assigned two lay readers, and a confirmation, and the sacrament of baptism was granted to a child

In the sermon of the service, the Archbishop said: There is no doubt that this year was full of troubles, sorrows and turmoil, adding: The pandemic has swept the world and killed more than a million people

And the bishop continued, and the pandemic caused alienation between people and members of the same family, and this year many people lost their jobs, so poverty spread too many, and many people became depressed.

He continued: It was a dark year by all standards, and this darkness reminds us of darkness about which the Prophet Isaiah spoke, saying, “The people walking in darkness have seen a great light on those living in the land of deep darkness a light has dawned.” (Isaiah 9:2)

He explained: In this prophecy, Isaiah foretold the appearance of the light that would overcome darkness and raise hope in the souls of the people walking in darkness. So what is the light that Isaiah predicts? The answer is found in his saying, “For to us a child is born, to us a son is given, and the government will be on his shoulders And he will be called Wonderful Counselor, Mighty God, Everlasting Father, Prince of Peace..” (Isaiah 9: 6), adding: Here he prophesied that Christ is the one who will deliver us from the darkness of this life.

It is worth noting that the confirmation service is the service of joining the new member in the church after declaring his faith to the people of the church. 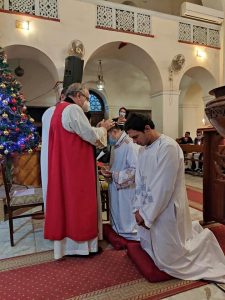 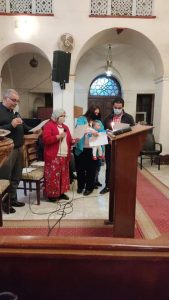 Christmas trees and Christmas lights cover the Episcopal/Anglican Cathedral before the service.