Dr. Mouneer Hanna Anis, Archbishop of the Province of Alexandria, received today, Tuesday, Ambassador Joseph Mum Majak of South Sudan to Cairo, at the headquarters of the Cathedral of All Saints in Zamalek

The ambassador praised the role of the church in Sudan in encouraging young people to accept diversity and confront tribalism, which was the cause of conflicts and wars in the country, thanking the church in Egypt for its care of the Sudanese in Cairo

The ambassador stressed the importance of the Egyptian role in providing aid to his country, especially the South Sudan Medical Center, which was opened in Juba recently

The Archbishop discussed with the ambassador the idea of ​​calling a conference for the people of Southern Sudan who have completed their university studies in Egypt in order to encourage them to return to the redevelopment of Southern Sudan in cooperation with the Egyptian government.

It is worth noting that the Episcopal Church in Southern Sudan is the largest in a number of Episcopal/Anglican churches and maintains strong friendship relations with its episcopal counterpart in Egypt. 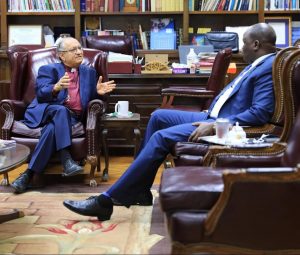 A joint baptism between Catholics and Anglicans.