Define the word crap. Lack of reason and excessive thinking

Saul foolishly used human wisdom by usurping the priestly work and offering a burnt offering to the Lord because the people had been separated from him and Samuel was late while Palestine’s gathered to fight him.

But now your kingdom will not be established (14)

* Saul, or Jonathan, or the people did not think of resorting to God for their salvation, so fear and trembling came upon them. The people hid in caves, thickets, rocks, edifices, and wells and some crossed the Jordan to the land of Gad and Gilead until there were only six hundred men left with Saul (15)

* When the mind is darkened, faith disappears, fear prevails, and hope is cut off. And the bodily man fears (death) as the beast fears slaughter

When Saul saw that the people were scattered, and many deserted the site, and the defeat was about to befall the people, Samuel did not come yet.

* God requires obedience to His commands and the implementation of His commandments, not animal sacrifices and burnt offerings

* Saul’s burnt offering carried the scent of disobedience to the commandments of the Lord and our need to be patient to the end, to be saved

If Saul had condemned himself, admitting his mistake, the situation might have changed, but he distinguished himself as a jealous person for the people of the Lord, and that he had prayed to the Lord. As for Samuel, who was late for the appointment, the situation became critical.

– If haste and rush lead to taking reckless decisions, Saul did not wait for the Lord and did not wait for Samuel, then he committed great foolishness, so he did what was not asked of him, and he went up for the burnt offering (9 and 10).

On closer examination, we find that the cause of all disturbances is our lack of self-judgment. So we find this confusion and we will not find relief

With a comparison between him and Saul, David has his sins, but he errs in human weakness, and he is a man of faith and obedience, and full of love and tenderness towards God. When he erred, he hurries with tears to confess without justifying himself. As for Saul, his mistake was rebellion and disobedience. When confronted, he justifies himself and his actions.

– If mental abilities and a strong physical structure without a real relationship with God work in the wrong way and reap humiliation and loss, and the opposite is also true, Saul had mental abilities that qualified him to organize the army, as he had a very strong physical structure, but on the other hand, he didn’t have a strong relationship with God.

– So when our choices are in accordance with the will of God, we support him in his spirit in all our wars, and vice versa. Whenever our choices are far from the divine will, we lose God’s support for us. Is this not what happened with Saul?!

What about you? Do you have complete obedience and loyalty to the Lord?

Rely on the Lord and build a healthy relationship with the Lord.

And if you do not correct your relationship with the Lord, you cannot take others with you to the Lord.

Pastor of the Sudanese Church in All Saints Cathedral 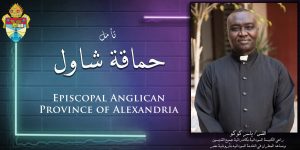