On the day of human fraternity…

The Archbishop: The Human Fraternity Document is a warm shout and call to governments and peoples

Dr. Mouneer Hanna Anis, Archbishop of the Province of Alexandria of the Episcopal/Anglican Church, participated today, Wednesday, in the celebration of the first anniversary of the signing of the Human Fraternity Document between Al-Azhar and the Vatican and various religious institutions, through the Zoom.

On his behalf, Dr. Mouneer Hanna, a representative of the Province of Alexandria, of the Episcopal/Anglican Church and said in his speech: We meet today to celebrate the anniversary of an important historical event, namely the signing of the document of human fraternity signed by the Grand Imam, Dr. Ahmed Al-Tayeb and His Holiness Pope Francis, that document came as a warm cry and call that overflows with love and peace to all the peoples and governments of the world extending from east to west and from north to south.

Hanna added: This document was issued by two men whose hearts are overflowing with the love of God and the love of his creation from mankind, and the motive behind issuing it was a feeling of great responsibility towards the peoples of the world who suffer because of violence, conflicts, wars, terrorism, dispersion, and distance from God.

He continued: This document came as a cry urging peoples and leaders to return and reconcile with God and with each other and to devote their efforts to peace-making instead of conflict.

And Hanna considered: The celebration of the first anniversary of the signing of this document is nothing but a reminder for the peoples to respond to that call by initiating measures to renounce violence, avoid wars and conflicts and stop selling and buying weapons that destroy humanity, stressing: It is really unfortunate that the major countries trade in these weapons and at the same time they called for respect for human rights.

Hanna said that this document brings back to our minds the importance of the family and the spiritual and human values ​​that, if they collapse, will be replaced by hatred, intolerance, and indulgence in all kinds of evils.

He concluded: The document on human fraternity inspires and encourages us to think about translating it into activities and programs that can be realized on the ground and increase the rapprochement of new generations and joint action for a more peaceful and stable world.

In the same context, the young leaders of the Episcopal/Anglican Church have participated in a joint workshop on the document in which Counselor Mohamed Abdel Salam, Secretary-General of the Higher Committee for Human Fraternity, listened to the opinions of young people about freedom of belief and how to embody the document of human brotherhood on the ground, as the church nominated Ramez Bekhit to be responsible for the interfaith Dialogue Committee, Monica Emil and Monica Milad are among the young leaders of the Episcopal Church. 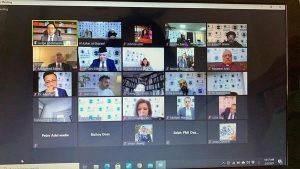 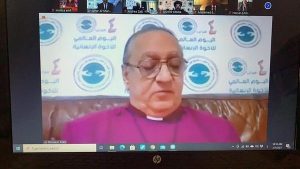