Archbishop to Pope Tawadros II: We look forward to future cooperation in serving the deaf and the “together we develop Egypt” project.

The Episcopal/Anglican Church said in a statement: The Archbishop thanked Pope Tawadros for sending bishops to participate in his inauguration ceremony, stressing the Episcopal Church’s desire for future cooperation with the Coptic Church in the areas of service such as serving the deaf and the Together we develop Egypt project, which aims to create a peaceful coexistence between Muslims and Christians.

The statement added: During the visit, Pope Tawadros II was introduced to the Episcopal/Anglican Province of Alexandria and the countries in which he serves. Bishop Samy indicated that there are church services in North Africa in countries such as Mauritania, Algeria, and Tunisia, in addition to western Ethiopia, which includes 145 churches belonging to the Alexandria region.

At the end of the meeting, Bishop Samy renewed his thanks to Pope Tawadros II for the love of the Coptic Church, which hosts Episcopal/Anglican priests once a year in the monastery of Anba Bishoy

The Episcopal/Anglican Church delegation included the Archdeacon Emad Basilios, head of the Council of Priests, and Reverend Yashua Bekhit, Dean of the Cathedral of All Saints, and the church’s media team, including Moheb Naim and Marina Mikhail. 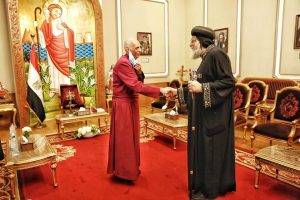 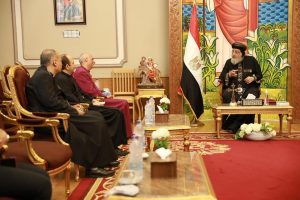 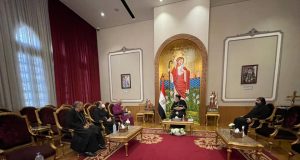 The Archbishop receives the American and British ambassadors and learns about the history of the church and its services.