The ceremony began with cutting the opening ribbon in the primary education building, and the school pupils presented various paragraphs that began with the Holy Quraan and then poetry. Al Manara Center students with disabilities performed an artistic performance.

Dr. Ali Gomaa expressed his happiness at what he described as the success of the Education and Training Model, a triad that builds a mentally and mentally mature personality

Hanna said that Japan rose after the tragedy of Hiroshima and Nagasaki with education, allocating a large budget for education as the main reason for Japan’s progress, and it is the same as our convictions about our homeland, Egypt.

He added: In 1995 we renewed the school and the thinker Ghali Shoukri, who was a graduate of the school, said that the school taught him the love of the nation and its Muslim neighbors and the refinement of reading the Qur’an.

Hanna continued: Dr. Ibrahim Fawzi, the former Minister of Industry, one of the school’s graduates expressed his gratitude to his school, which used the best educational methods, in a letter, he sent to the school’s family.

He continued: We built a replicable model and succeeded in producing this model when we saw our children today with mature minds revealing their personalities.

While Mouhammad Mousa, the deputy governor of Menoufia said that the school reflects the authentic spirit of Egypt, which brings together Muslims and Christians, in which the crescent and the cross are raised.

He stressed his pride in the magnitude of the achievement of the Episcopal School that builds an aware citizen who believes in his country who knows its national fabric.

On his behalf, Magdy Abu Al-Saad, the school director, said that the new expansions add three classes to the school’s absorptive capacity in the elementary stage, with its Arabic and language sections, stressing that the additional classes come in response to the wishes of parents as we receive huge numbers of applicants annually and the conditions of density prevent us from accepting them.

The Episcopal School was established 135 years ago, as the Episcopal Church had a clear goal of serving through its institutions in Egypt, by taking care of the spiritual and the religious side of the human being by covering educational, health, and social needs, and then the Episcopal School in Menouf is considered a practical link that connects the church to society and does not isolate it from the building movement in Egypt. 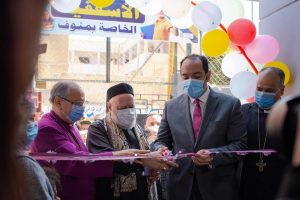