The Deaf Unit of the Episcopal/ Anglican Church in Egypt started training “Montessori” yesterday at the Deaf Unit in the Old Cairo area. The training targets 14 schools from September 3 to September 24, 3 times during the week as the training focuses on improving the quality of education within the school for the deaf student’s using new tools.

Montessori is an educational curriculum that emphasizes the need for the educational process to pay attention to the development of the child’s personality in an integrated manner in the psychological, mental, and physical-motor aspects, to help him develop his creative abilities and solve problems

The unit works to rehabilitate and educate the deaf and their families and support communication in sign language in a way that guarantees the improvement of the scientific, health, social and economic level in order to enable them to be self-reliant and integrate into society through academic education, vocational training, activities, trips, and conferences.

The Deaf Unit was established in 1982 under the umbrella of the Episcopal Church, and it was declared in Social Affairs under the number 4014 of 1993. 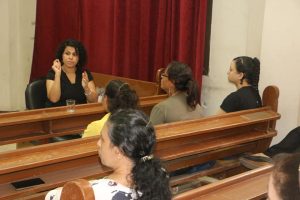