The Episcopal School in Menouf prepares for the new academic year

The Episcopal School in Menouf, which is affiliated with the Episcopal/ Anglican Church in Egypt, held a meeting of the Council of Parents, Trustees, and Teachers, as part of its preparations for the start of the new school year, where the final precautionary measures and the rules of social distancing that the school would take during the school day were discussed

The school started in a statement issued by the Episcopal/Anglican Church today, we discussed ways to divide students, attendance and departure times, and how to implement remedial groups in light of the threat of the Coronavirus, as the school proposed the idea of ​​distance education and the training that took place for teachers during the last period in preparation for the new academic year 2021.

For his part, Magdy Abu Al-Saad, the school director, emphasized: The safety and health measures for workers and students, such as providing sterilization and hygiene tools and measuring temperatures to ensure safety, have been emphasized, starting from entering the school until the end of the school day.

The Episcopal School was founded 135 years ago, as the Episcopal/Anglican Church had a clear goal of serving through its institutions in Egypt, by taking care of the spiritual and religious side of the human being by covering educational, health and social needs. 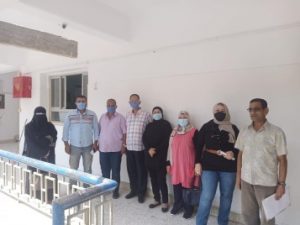