Jewish holidays are not just occasions for the Jewish people, but they refer to their lives and what happens to them on the journey of life

Through their exodus from Egypt until entering the Promised Land, the Lord has set seven feasts that refer to some occasions. For example, the exit from the land of Egypt is linked to the Passover festival, while their dwelling in tents is linked to the Feast of Tabernacles.

We will try to focus on two Jewish holidays associated with the occasions experienced by the Church. The first is the Feast of Firstfruits, which is linked to the Feast of Resurrection, and after it the Feast of the coming of the Holy Spirit, and it is related to growth, planting, fruit, and the spread of God’s kingdom on earth, which is what we find in the rite of our Episcopal/Anglican Church.

Regarding the Feast of the Firstfruits, the Bible states: But Christ has indeed been raised from the dead, the firstfruits of those who have fallen asleep (1 Corinthians 15:20).

The first-fruits feast is considered the first agricultural festival that the people practiced after entering the land of Canaan, as it comes at the beginning of the barley harvest.

The priest would take the bundle of the first fruits and repeat it before the Lord, indicating that God, who gave them the beginning of the fruits, would complete the whole harvest.

Fiftieth festival (weeks) but you will receive power when the Holy Spirit, and you will be my witnesses in Jerusalem and in all Judea and Samaria and to the ends of the earth (Acts 1:)

The Feast of Firstfruits is linked to the Feast of Pentecost because it comes seven weeks after it, that is, 50 days.

This feast comes on the sixth day of the third month, and this feast was called the harvest feast because it was the time of harvesting wheat, and it coincides with the day of the coming of the Holy Spirit on the church. Sharia law was fifty days after their exodus from Egypt.

Among the Eid offerings are two leavened loaves of bread baked with certain specifications. Unlike previous feasts, we find the Lord commanding an offering containing leavened bread, while it was forbidden in the feasts of Passover and Unleavened Bread.

The commentators differed on the meaning of the presence of leaven in the offering of this feast, as some see that leaven is always a sign of sin, and the presence of leaven is never mentioned in offerings or feasts symbolizing Christ, while here the two loaves symbolize for us in the old, corrupt and new natures of Christ’s work in us, and the coming of the Holy Spirit on the church does not free it from Sin only rebukes her over her, so the offering of the two loaves was not presented to the Lord, but the priest.

As for others, the leaven here is a sign of vitality and reproduction, and also an indication of the spread of the kingdom of God, as in the example of the woman who took leaven and put it in flour (Matthew 13:33) since after the Holy Spirit came to the church, the kingdom of God spread with power. 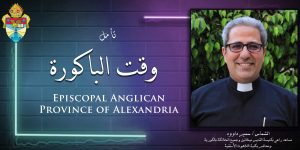 In preparation for the new school year…

In preparation for the school year…