In the first Sunday Service in Arabic

The Archbishop of the Episcopal/Anglican church: This is how Christ advised resolving disputes within the Church

Mouneer Hanna: Christ recommended preserving the unity of the Church and avoiding disputes

Dr. Mouneer Hanna, Archbishop of the Province of Alexandria, presided over the Episcopal/ Anglican Church on Sunday, the first service after the government allowed the churches to return collective prayers on Sundays, in the All Saints Cathedral in Zamalek, as lead the service that ended a short while ago, the first in Arabic after he presided over the prayers in English last week as part of the foreign service.

In the Sermon, he explains “Hanna,” the commandments of Christ, which included preserving the unity of the Church and the continuation of loving relationships among its members, quoting the words of Christ, 15 “If your brother or sister[a] sins,[b] go and point out their fault, just between the two of you. If they listen to you, you have won them over. 16 But if they will not listen, take one or two others along, so that ‘every matter may be established by the testimony of two or three witnesses.’[c] 17 If they still refuse to listen, tell it to the church; and if they refuse to listen even to the church, treat them as you would a pagan or a tax collector. (Matthew 15: 18-17)

The archbishop added in his sermon: Here Christ puts before us the best way to resolve disputes between believers to ensure the harmony of the churches, members of the one body Christ together.

The Archbishop of the Episcopal/Anglican Church set steps to resolve conflicts within the Church, the first of which is to go to your brother who sinned against you and admonished him, that is, to take the initiative and go to liquidate the causes of the disagreement, stressing: Do not wait for the wrong-doer to come to you because waiting increases feelings of anger within you.

As for the second of those steps, Hanna said: To blame the one who sinned against you, and admonition here means to explain “lovingly” how he offended your feelings, provided that the reproach is between you and him alone, this ensures that the disagreement is contained in a narrow circle so as not to cause embarrassment in front of others.

Hanna considered that seeking the help of two witnesses or wise men from the elders of the church is a solution to settling disputes. If the sinner does not listen, his relationship with the group of believers will be cut off until he repents for his actions.

While the church was keen to measure the temperature of the congregation and to ensure that the precautionary measures were followed and the use of personal tools, in addition to dividing the church seats in a manner that ensures social distancing. 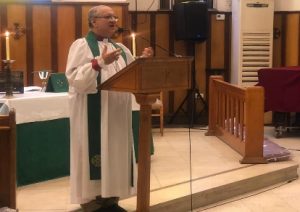 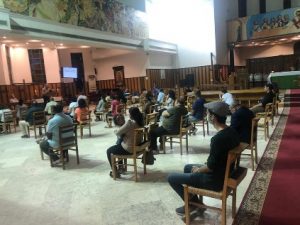 Master Of Arts in Leadership Degree