Synod members: We are committed to our independent faith and identity

The Synod of the Diocese of Egypt of the Episcopal/Anglican Church, which was presided over by His Grace Archbishop Dr. Mouneer Hanna Anis, with the participation of Bishop Dr. Samy Fawzy, all priests and deacons of the church, and lay representatives of all churches and institutions of the diocese at All Saints Cathedral in Zamalek.

The Synod members affirmed in the statement issued by the church: We adhere to our belief and our independent identity, as we as an Episcopal/Anglican Church have been present in the Arab Republic of Egypt for nearly two hundred years as Episcopal/Anglican Bishops, and we adhere to this identity, and we trust that our beloved President Abdel Fattah El-Sisi and the great constitution of our country issued in 2014 will not allow us to be forced to follow any other faith that is against ours. That is why the members of the Synod of the diocese of Egypt unanimously affirm their adherence to the distinct and independent episcopal identity.

The members of the Synod expressed their thanks and appreciation to the Archbishop of Canterbury and the Anglican Communion in the world for agreeing to transform the Diocese of Egypt, with North Africa and the Horn of Africa into the territory of Alexandria, which oversees ten African countries.

The members of the Synod commended the sincere efforts made by the state, led by President Abdel Fattah Al-Sisi, to spread peace and security in the Middle East, especially in finding a just solution to the Palestinian issue that ensures that the people live.

Palestine is an independent and sovereign state, The members also supported all the efforts made by the President to guarantee Egypt’s right to the waters of the Nile River.

The members of the Synod thanked the Archbishop of the Province of Alexandria, Dr. Mouneer Hanna, for his service and generosity for forty-two years during which he was an example of a Christian leader and living a pious life, and for his openness, love, and development to serve the diocese, whether for the people of the Church or for the Egyptian society and the societies of North African countries and the Horn of Africa.

The Synod statement came with a number of recommendations, including Emphasizing the importance of discipleship, evangelism, and mission as a central goal for the Church’s work, as well as praising the important developmental work carried out by the Episcopal Care Foundation, Episcocare.

To serve the community of its entire spectrum, this has evolved in recent years from providing aid to development, The members also praised the perseverance in dialogue and the diocese’s pioneering projects in this field, especially “Together we develop Egypt” and “Together We Plant a Tree of Hope”, which works to consolidate the principle of coexistence between Egyptians are Muslims and Christians.

They emphasized the great development and boom in the performance of the media and press center of the church, which, despite its recent establishment, is taking great strides to put the church’s service and activities in a distinguished media position, which doubles the impact and extension of the work and mission of the church and its impact.

The statement recommended the importance of training leaders in all fields of priests and laymen, whether in church services or community service and dialogue, to move towards the future at a steady pace. 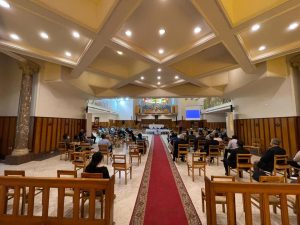 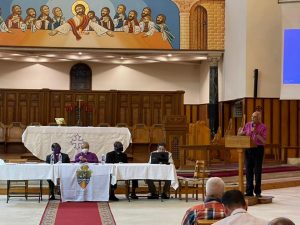