Dr. Samy Fawzy, Archbishop of the Episcopal/Anglican Province of Alexandria participated in the meetings of the Archbishops around the world through the Zoom meeting, where the meeting discussed the challenges of church service in the 42 regions of the church around the world

The Archbishop clarified that environmental issues were of global concern to religious leaders, especially after the issue of climate change was raised at the Rome summit last October, in the presence of Justin Welby, Archbishop of Canterbury, the Sheikh of Al-Azhar, and the Pope of the Vatican.

The Archbishop indicated that the meeting also included the exchange of visions and ideas on the Lambeth Conference of the Anglican Church, which is held every ten years, and its next session will be in 2022.

Justin Welby, Archbishop of Canterbury, had witnessed the inauguration of the Province of Alexandria in early October, in the presence of Anglican Archbishops from all over the world. 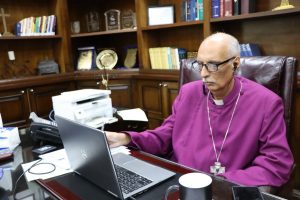 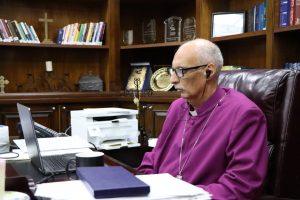 The Archbishop ordains a priest for the Sudanese service at St. Michael’s Church in Heliopolis