In a meeting with the Dutch ambassador

The Archbishop: Our community initiatives push the fields of development and interfaith dialogue

Dr. Mouneer Hanna, Archbishop of the Province of Alexandria of the Episcopal/ Anglican Church in Egypt, met today, Wednesday, Mr. Han-Maurits Schaapveld, the new Dutch ambassador in Cairo, at the church’s headquarters in Zamalek.

Hanna gave the new ambassador an overview of the Together we develop Egypt project, which is sponsored by the Church in partnership with the Misr El-Kheir Association, while the Dutch embassy is a prominent contributor to the project

Hanna said that the project resumed its activities last month in the communities of Cairo and Alexandria after several months’ interruption due to the Corona pandemic, noting that the project aims to create a state of a dialogue between Muslim and Christian youth, resulting in community initiatives that contribute to changing the local community, rejecting intolerance and celebrating difference.

Hanna pointed out that the church is still reaping the positive effects of the Together for Egypt project, which included priests and sheikhs in dialogue initiatives for years, as the ties between graduates remain strong

Hanna referred to the efforts of the community centers affiliated with the Episco Care Foundation, which is the Samaritan arm of the Church, in contributing to the provision of job opportunities that limit the phenomenon of illegal immigration, setting an example with two examples of young people who returned from a migration journey and trained with developmental initiatives and changed their lives. 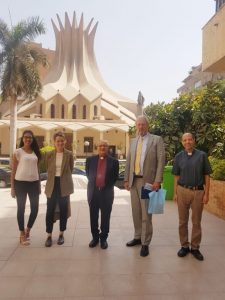 EpiscoCare: Training of volunteers for community work in Ain Shams and the City of Peace