Dr. Mouneer Hanna, the Honorary Archbishop of the Episcopal/Anglican Province of Alexandria, recounted the journey of establishing the province of Alexandria for the church, which is inaugurated at the Episcopal/Anglican Cathedral of All Saints today, in the presence of Justin Welby, Archbishop of Canterbury and the spiritual leader of the sect in the world.

The honorary archbishop said in his speech during the inauguration ceremony that the journey of the Episcopal/Anglican Church in Egypt began two hundred years ago when the desire of a number of Episcopal Christians to build a place to worship met with the generosity and grace of the Muslim governor Muhammad Ali Pasha, the governor of Egypt, who allocated a plot of land to build the first Episcopal/Anglican Church In Alexandria, when the number of church members increased, royal and republican decisions were issued to establish churches in many cities of Egypt, stressing that the church contributed to correcting the distorted image of Islam and Muslims in the West through mutual international visits.

In his speech, Hanna added: The years passed until 2004 came, which was a turning point and a starting point in the journey of the diocese of Egypt, where the parish synod agreed to launch the church towards serving God and society. In 2007 a new episcopal district was established in the Horn of Africa, and in 2008 another episcopal district was established in North Africa, and in 2009 the Church of Alexandria was converted into a cathedral and Dr. Samy Fawzy was appointed dean of Alexandria. And when the number of church members increased in the new areas and cities, new churches were established in those areas new churches in these areas.

Concerning the Church’s relationship with Al-Azhar, the honorary Archbishop said: The Church also played an important role in the dialogue between the Anglican Communion and Al-Azhar Al-Sharif, and took many initiatives to support national unity and sectarian harmony among the members of the community. To the West about our Muslim loved ones through mutual international visits.

Hanna explained: We chose the name of the new region as “Province of Alexandria” due to the importance of Alexandria in the history of the Church and because it was the starting point in our church’s journey, as well as due to the historical importance of the Alexandria School in shaping the theological thought of the world during the first millennium, and in the hope that the Alexandria Region would have A major role in shaping theological thought in the third millennium.

The honorary archbishop concluded his speech by saying: I am confident that, by the grace of God and under the leadership of Archbishop Samy Fawzy, the Church’s journey and service will continue to deliver a message of love and peace to all the peoples of the new territory, and we will follow the commandments of our Savior Jesus Christ, who toured doing good for all people, preaching the gospel, and healing He who is broken-hearted, and he proclaims freedom to the captives, and to the blind with sight. 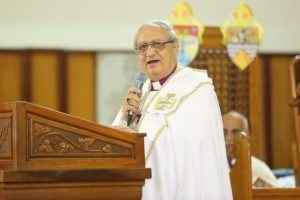 In the presence of the Archbishop of Canterbury