History of the Province

The Episcopal / Anglican Province of Jerusalem and the Middle East, created on 6 January 1976, is one of the largest and most diverse provinces within the Anglican Communion, stretching from Algeria in the west to Iran in the east and from Somalia in the south to Cyprus in the north.

There are four dioceses: The Diocese of Jerusalem (Israel, Palestine, Jordan, Syria and Lebanon), The Diocese of Cyprus and the Gulf (Cyprus, Bahrain, Iraq, Kuwait, Oman, Qatar, Saudi Arabia, United Arab Emirates and Yemen), The Diocese of Iran (Iran), and The Diocese of Egypt with North Africa and the Horn of Africa (Egypt, Algeria, Tunisia, Libya, Ethiopia, Eritrea, Somalia and Djibouti). Today the Province has over 50,000 baptized members in approximately 200 congregations, is episcopally led by a President Bishop, and is synodically governed by the Provincial (Central) Synod. 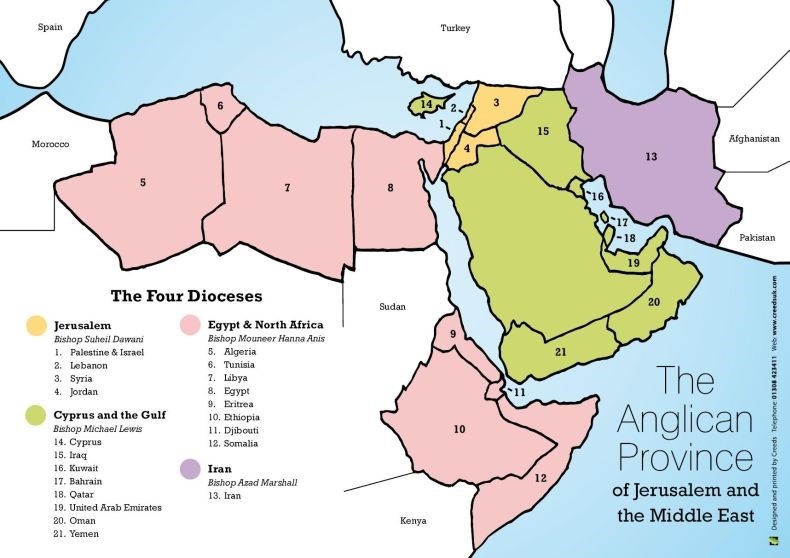 HISTORY OF THE PROVINCE

The history the Province of Jerusalem and the Middle East stretches back to when the Anglican presence in Jerusalem was started in 1841 as a joint venture between the Church of England (Queen Victoria) and the Lutheran Prussians (King Frederick William IV).  In 1841, The Archbishop of Canterbury consecrated Michael Solomon Alexander as the first bishop of Jerusalem (1842-1845).  Subsequent bishops were supposed to be nominated alternately by the English and Prussian sovereigns and to be consecrated by Anglican bishops.

“believed that the way to evangelize the people of the Ottoman Empire was through the members of the Middle Eastern Churches.  Since, however, he considered those churches to be wayward and in deep spiritual sleep, they had to be awakened and restored to the true and pure faith, namely, to the evangelical faith that is founded on the Bible alone, the sole authority for faith” (Frarah 729).

This approach to strengthening the Orthodox Churches concerned Dr. William Howley, the Archbishop of Canterbury from 1828-1848, who did not want the Anglican presence in the Middle East to create more divisions.  He wrote that the Bishop of Jerusalem should play a bridging and healing role, “of putting an end to the divisions which had brought the most grievous calamities to the Church of Christ.”

The mission of the Anglican Churches in the Middle East continued with an emphasis on serving the local communities without any discrimination between Christians, Muslims and Jews.  The Archbishop of Canterbury appointed the Archbishop in Jerusalem who oversaw the whole region (the history of this period is mentioned in the individual diocese later on).

Archbishop Angus Campbell MacInnes, after serving from 1957-1968 resigned and it was announced that the Archbishop of Perth, George Appleton, had been appointed by the Archbishop of Canterbury and in consultation with the other metropolitans of the Anglican Communion, to fill the vacancy in Jerusalem (1969-1974).  In early 1970, Archbishop George Appleton appointed a special committee to consider the future of the dioceses including the Archbishopric.  Discussion took place regarding a possible restructuring of the Archdiocese and during the interim, Bishop Albert Kenneth Cragg (1970-1974) served as the Assistant Bishop of Jerusalem and then Bishop Robert Stopford (1974-1976) served as the Vicar General of Jerusalem.