Head of the Episcopal/Anglican church: Had it not been for the resurrection, the Christian faith would have been a hoax

Dr. Mouneer Hanna, Archbishop of the province of Alexandria, considered that if the Resurrection of Christ had not happened in reality, the Christian faith would have been a lie and a hoax.

He cited the bishop in the Sermon on the Mass of Resurrection feast as the Apostle Paul said in his letter to the Corinthians when he said: “13 If there is no resurrection of the dead, then not even Christ has been raised. 14 And if Christ has not been raised, our preaching is useless and so is your faith. 15 More than that, we are then found to be false witnesses about God, for we have testified about God that he raised Christ from the dead. But he did not raise him if in fact the dead are not raised. ”(1 Corinthians 15: 13-15)

Hanna added: Paul would not have written these words if there was no doubt about the resurrection of Christ, completing: We know that the chief priests of the Jews asked Pilate to place guards on the tomb of Christ lest his disciples steal his body and claim that he rose from the dead, but Christ rose and witnessed The guards on his resurrection.

Hanna continued: Saint Luke wrote about the appearance of the Lord Christ to the disciples of Emmaus and stated that they returned to Jerusalem to tell the rest of the disciples about the resurrection.

Hanna continued: Not only that, the disciples have endured all kinds of torture and persecution, but have also tolerated all kinds of killing so that they do not deny the truth about the resurrection of Christ.

And he went on: And you may agree with me that it is illogical for someone to accept to die because of an unreal story or a fictitious myth, and the history of Egypt tells about the thousands of martyrs who were killed at the hands of the Romans in the first and second centuries because of their belief in Christ who was crucified and rose from the dead and will come to judge The living and the dead

The bishop emphasized: The Church of Alexandria was founded on the blood of these martyrs, and so many churches that spread in the ancient world were also founded.

Hanna concluded: We have to be conduits for God’s love for humanity, so we love our neighbors and work with strong hands to build our country, let us, in the spirit of the Resurrection, be good news for everyone around us.

Christ is risen … He is risen indeed. 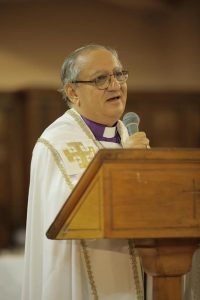 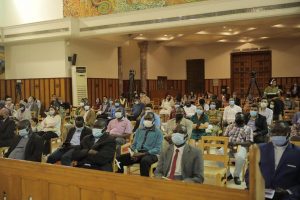 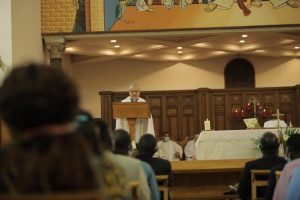 The Episcopal/Anglican church provides interpretation in sign language and dedicates a corner for the Deaf during the Easter service.