Harpur Memorial Hospital in Sadat affiliated with the Episcopal/Anglican Church in Egypt announced that it will continue to receive patients in the hospital, with strict preventive measures that ensure the safety and health of hospital staff and patients who come to them from the threat of the emerging Coronavirus pandemic.

On his behalf, Dr. Hany Abadir, the hospital director, explained: The hospital operates normally while taking preventive measures from sterilization, social distancing, and screening of patients by measuring the temperature and the percentage of oxygen for each patient before admission. During the month of January, the hospital received about 3,611 patients.

Abadir added: The suspected cases are transferred to a different entry gate to limit the spread of infection among the rest of the patients, and then the completion of the checks begins to confirm or deny the suspicion and after confirming the infection, the patient is given instructions for home isolation, which is to allocate personal tools for the patient, allocate an individual room, wear The muzzle of family members when dealing with the patient, the need to sterilize surfaces with chlorine and hands by washing them with soap or rubbing them with alcohol, the need to follow up with the doctor, especially if any new symptoms appear in addition to taking the treatment protocol recommended by the Ministry of Health and if the condition is critical, it is transferred to the General Hospital for isolation.

It is worth noting that the hospital was initially opened as a medical center consisting of a number of clinics in 1996, and then the hospital was opened at the end of 2011, as the hospital consists of several departments, which are the outpatient department and includes 16 specialties: internal medicine, children, surgery, orthopedics, gynecology, Nose and ear, conjunctivitis, skin, teeth, heart, urinary tract, psychological and nervous system, digestive system and liver, brain and nerves, physiotherapy, blood vessels, in addition to the emergency department, which works 24 hours in parallel with the laboratory services, radiology, and operations, as well as the internal section consisting of 6 Rooms with a capacity of 15 beds. 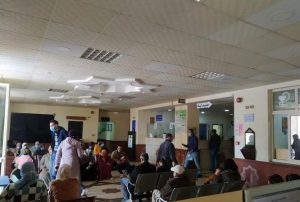 Vocational training workshops.. Completion of the activities of the Together we develop Egypt project in Alexandria.

After participating in a webinar on the martyrs of Libya, with Pope Francis and Pope Tawadros