Fourteen scenes that embody the Passion of Christ

Dr. Mouneer Hanna, Archbishop of the province of Alexandria, presided over the Episcopal/ Anglican Church today, Friday, the Good Friday service known as the Friday of the Crucifixion, which is the Friday that witnessed the crucifixion and torture of Christ according to the Church’s doctrine, in the Cathedral of All Saints in Zamalek.

The church stated that the bishop had performed the Good Friday service with a ritual containing fourteen scenes of the crucifixion of Christ. The first scene includes readings on the scene of the Garden of Gethsemane and a prayer, then the second scene, readings about the betrayal of Judas, and silent moments of contemplation with the words of a special hymn from the worship team and prayer, and the third scene It contains readings that narrate the Council’s condemnation of Jesus and meditation, then the fourth scene, readings about Peter’s denial of Jesus and a confessional prayer, then the fifth scene, readings about Jesus’s trial before Pilate, as the scenes of the journey of the cross continue until the fourteenth scene, which is the placing of Jesus in the tomb.

All scenes begin with saying: O Christ, we praise and bless you, and the people respond: Because with your holy cross you have redeemed the world.

The scene ends with the chanting of the people: Holy God, Holy Power, Holy Living Who Never Dies, Lord have mercy on us. 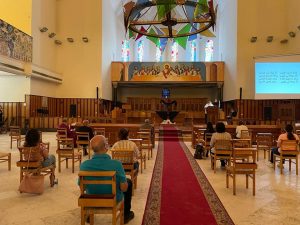 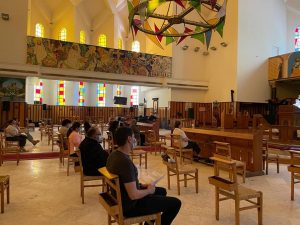 The Archbishop calls for prayer of readiness, affirming: Remember the Corona patients