Mouneer Hanna is opening new expansions in the Episcopal Hospital: the poor first

The second phase of the outpatient building, the external emergency building, and a new building at Harpur Memorial Hospital in Menouf, affiliated to the church, in the presence of Dr. Gomaa

Very happy with the new building, but we are also interested in our facilities and their activation in serving people did not come by chance, but God sent them to serve the community

Ali Gomaa: Training in medicine and vocational training, science, and art, we receive with books, art, and training, it is not absent from the hospital that teaches and train medical teams at the highest level that want perfection

While Mouhammad Mousa, deputy governor of Menoufia, considered that God sent us the Coronavirus as a test and a call for human solidarity, stressing that the hospital is witness to 110 years of partnership in goodness, love, and preparation

On his behalf, Dr. Samir Rizkallah, director of the hospital, said: 1000 emergencies from the outpatient building, the emergency department, and the clinic, in addition to an analysis laboratory.

This is the second phase of a new 550 square meter outpatient building.

It is worth noting that the Harpur Menouf Hospital was founded by Dr. Frank Harpur, an Irish physician sent in 1910. Dr. Harpur (Harmel, as the Egyptians called him) had arrived in Egypt in 1889 and his dream was to provide medical service to the simple and deprived villagers there, either due to their lack of hand or to their distance from The place of providing medical service and in the year 1894began to wander by boat in some branches of the Nile River to reach these villagers and treat them due to the need for a fixed hospital to treat more complex cases and also to increase the number of patients, Harpur Menouf Hospital was established in 1910 and Harpur was its first director and the hospital continued He works from that date, bearing in mind the goal for which the hospital was established, and a number of doctors took turns managing it after the death of Dr. Harpur. 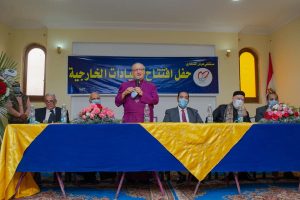 “Deaf unit”: A workshop for the art of Khayameya and selling the products of the participants.