“EpiscoCare”: Awareness sessions on family protection methods from the Coronavirus

The EpiscoCare Foundation of the Episcopal/ Anglican Church in Egypt organized awareness meetings on “ways to protect and support the mother and the family during the Corona pandemic”, in cooperation with the Information Complex in El Salam city and the National Council for Women, in the presence of 21 women, at the Foundation’s City of Peace Development Center.

On his behalf, Dr. Maged Moussa, Director of the EpiscoCare Foundation, said: The meetings aim at the need to work to spread awareness of women’s rights and provide support for mothers and women to protect their families in light of the socio-economic challenges caused by the Coronavirus, while clarifying the state’s efforts in providing support and attention to reconciling the conditions of working mothers to take care of Their children, in addition to the state’s provision of a special grant to families affected by the Covid-19 epidemic.

Moussa continued: Emphasis was placed on the importance of following precautionary measures and working to provide educational opportunities for children, especially females, in addition to paying attention to providing proper nutrition for children to protect them from various diseases. 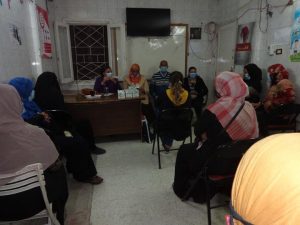 Gusour Center in the cathedral is hosting the Isis String Orchestra with the participation of a quartet quartet.