Archbishop: We begin the Holy Week, in which the plan of salvation of mankind was fulfilled

Dr. Mouneer Hanna Anis, Archbishop of the Province of Alexandria, presided over the Episcopal/Anglican Church today, Palm Sunday Service, known as Palm Sunday, at the Cathedral of All Saints in Zamalek.

Hanna said in the sermon: We celebrate Palm Sunday, which is the day in which the Lord Jesus Christ entered Jerusalem, and it is also the beginning of the Holy Week, which includes the events of the crucifixion of Christ and then his resurrection from the dead.

And we know that this week was the fulfillment of the divine plan to save humanity through the death of Christ as the redemption of humanity.

And the bishop completed: came the entry of Jesus Christ to Jerusalem to achieve the prophecies of the Old Testament has written the prophet Zechariah, these words, “9Rejoice greatly, Daughter Zion! Shout, Daughter Jerusalem! See, your king comes to you, righteous and victorious, lowly and riding on a donkey, on a colt, the foal of a donkey.”(Zk 9: 9)

Hanna explained that the Bible clearly indicates that the king of Israel will enter riding on a donkey as Christ entered, and the people must have known this prophecy well, so we find them chanting the words of Psalm 118 saying, “Blessed is he who comes in the name of the Lord.
From the house of the Lord, we bless you.”

Hanna cited the words of Mark when he mentioned that the people were screaming, saying, 9 Those who went ahead and those who followed shouted,

“Blessed is he who comes in the name of the Lord!”[b]

10 “Blessed is the coming kingdom of our father David!”

“Hosanna in the highest heaven!”

The bishop explained this by saying: This means that the people saw that the person of Jesus Christ was the expected king who would come according to prophecy from the family of King David, and the people looked forward to the salvation that Jesus Christ would achieve from the oppression and humiliation of Roman colonialism,

Christ confirmed it was well known that he entered into Jerusalem means that his death on the cross, we have repeated it to his disciples several times as saying, 33 “We are going up to Jerusalem,” he said, “and the Son of Man will be delivered over to the chief priests and the teachers of the law. They will condemn him to death and will hand him over to the Gentiles, 34 who will mock him and spit on him, flog him and kill him. Three days later he will rise.” (Mark 10: 33-34),

Hanna continued: The Lord Jesus knew very well that he would be crowned a king in Jerusalem, but not an earthly king but a heavenly king, adding: The Lord Jesus Christ was certain that his entry into Jerusalem and his purification of the temple from the sellers and the corrupt would provoke the Jewish priests and this would lead him to death by crucifixion, but he was also certain. He came to offer himself a living sacrifice to redeem all men

The bishop concluded: Our celebration of a palm tree makes us wonder: Do we chant on this day, “Command us,” meaning that we have saved an earthly king that we follow in order to fulfill our dreams in this life, or do we chant “We commanded” the king whom we want to rule over our lives and trust that he will take us with him to his kingdom? 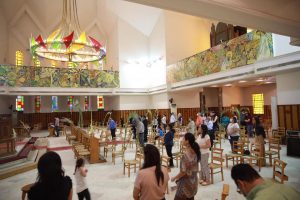 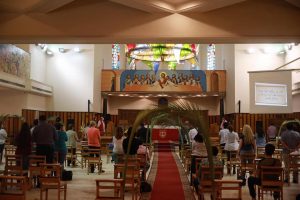 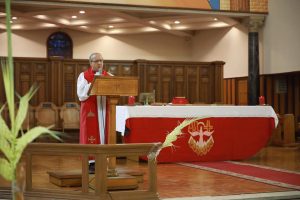