Dr. Sami Fawzy, Archbishop of the Episcopal/Anglican Province of Alexandria, received today, Wednesday, members of the Media Committee of the Egypt  Council of Churches, at the church headquarters in the Cathedral of All Saints in Zamalek.

Dr. Samy Fawzy, Archbishop of the Episcopal/Anglican Church, stressed the importance of the role of the Media Committee in the Egypt Council of Churches, which plays distinguished roles in the field of rejecting intolerance and spreading the spirit of Christian love among members of different denominations, pointing out that the Media Committee expresses the role of the Egypt Council of Churches in the various newspapers and media.

He also praised the spirit of cooperation and love shown by the heads of Christian denominations towards the Episcopal/Anglican Church, expressing their complete readiness for joint cooperation, wishing that this spirit would prevail among the church’s children and not be limited to leaders.

Rev. Refaat Fikry, head of the Media Committee of the Egypt Council of Churches, said that the Egyptian society needs a strong push to renounce fanaticism and extremism and build an enlightened society in which the values ​​of peaceful coexistence prevail, stressing the role played by the media in this regard, in addition to the heads of Christian denominations.

While Father Rafiq Gereish, a member of the Media Committee, considered that the spirit of love and cooperation between Christian denominations requires a personal conviction that constitutes the driving force for joint action and leads to the consolidation of ties between churches, pointing to his previous participation in evangelical marriage ceremonies and the rite of baptism in the Episcopal/Anglican Church.

The meeting was attended by the Archdeacon Emad Basilios, Rev. Bahig Ramzy and Moheb Naim, director of the media center in the church, from the Catholic Church, Father Rafiq Greish, media representative for the Egypt Council of Churches, from the Evangelical Church, Rev. Refaat Fikry, head of the Media Committee at the Egypt Council of Churches, from the Greek Orthodox Church, Eng. Tamer Farkouh, and from the media, Rima Al-Sigali representative of the Catholic Church 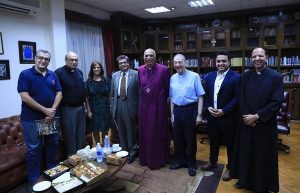 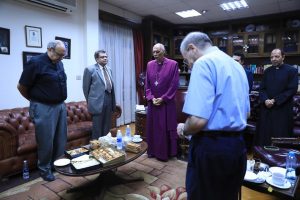 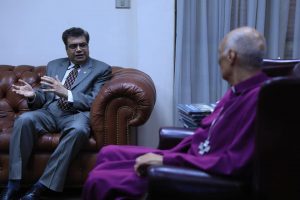 In cooperation with the Ministry of Health